[PHOTOS] My trip to India

After a short week and a half in India, I offer a selection of photos depicting this unforgettable journey. This short visit allowed me to discover a facet of India, off the beaten track for tourists. In fact, I just spent 4 days in the Indian capital New Delhi to retrouvrer me in the countryside of the Punjab region. (Near the Pakistan border) Discover India with Indian you can not open a lot of doors ...

First day waking up car after 6 night drive right out of the plane.
View Larger Map

On the road. 6H car delhi to reach rural Punjab

Finally arrived in the village of Jalandhar (in Punjab), met with local pastries

Small tour of the "big" city next door, Amritsar.

The pictures below show the traditional bread making (cakes actually) Indian "Chapati". The fuel used for cooking is that other than the manure of cows (second photo at left), please sacred!

Near the temple Sikh Jalandhar:

For this series of portraits of villagers, I mainly used the 50mm 1.2 (to f/2.0-2.5) and my new 35mm f/1.4. Few have taken the 85mm 1.2 because this length did not give me enough proximity to my subjects. In contrast, the 35mm 1.4 is a great tool for U.S. plans , but not for close-ups of this type. 1, it requires too short a distance to the subject that will soon feel embarrassed, 2 it deforms slightly when you are too close (see second photo below right). Long live the 50mm for portraits of this type:

In my travels, I avoided taking my carbon tripod on my Vertex 200AW because it was already full. Therefore, I can shoot at night freehand. The two night shots of India Gate were taken with the 35mm 1.4 to 320 iso.

This is a good focal length for landscape photos in low light, because f/1.4 at 1/35 s (1 / minimum length for net) lets you shoot in a lot of difficult situations! 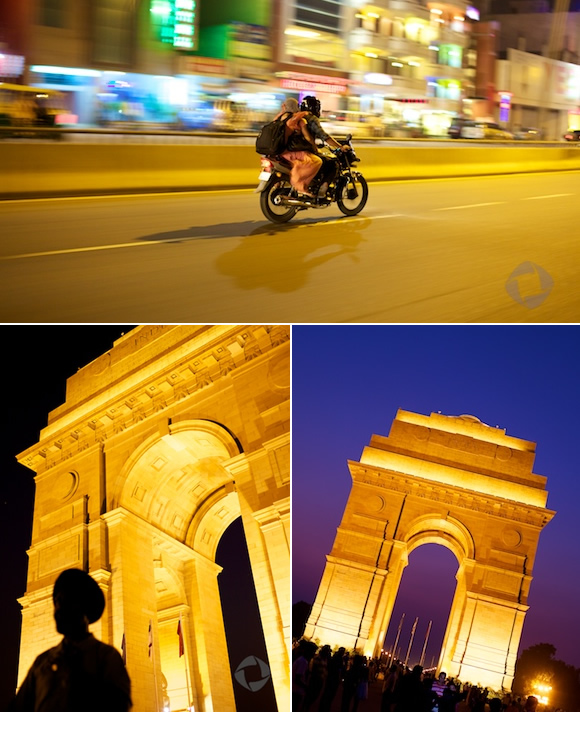 Back to civilization, New Delhi By night - The India Gate

In addition, with the 70-200 IS f/2.8 IS II version some of my night shots were crisp in 1/20s! This is not my favorite but definitely my favorite optical ZOOM! 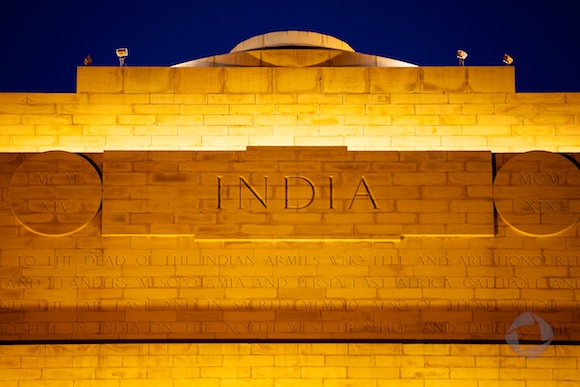 NB: The use of tripod is still required if the pictures of monuments are important to you! By closing your diaph and low sensitivities, you will always get better results.

One of the most significant moments for me was the visit to Old Delhi (Old Delhi), or where the tourists do not go! In fact, you end up in substandard and narrow streets, crowded with uncontrolled traffic and unpaved roads. In short, the total area, right next to the sanitized tourist center. But I loved it! For me it was also that of India.

Here was my favorite in the 35mm f/1.4 Focal! The ultimate weapon of a street photographer in my opinion. The popular thinking has always advised 50mm. For most pictures of streets, I found much more convenient and closer to human sight the famous 50mm 35mm.

For simplicity, 50mm for me is a human view "concentrated" or attached to a subject, and the 35mm for a human called "broad" made to capture a scene. In any case, thanks to the 35mm I shot discreetly and stolen device on the belly of the scenes I would not have had with the 50mm. In India, especially in cities, people do not necessarily like to be like that in the picture. You have to ask permission. Therefore, you should try to get some shots discreetly box on your stomach with your finger on trigger

After Old Delhi, welcome to the quiet of a very religious and spiritual India ...

The minaret of Qutub Minar

The flower market in New Delhi

Back in Punjab to attend a traditional wedding. But just before, a small visit to the cane fields and rice. I was able to do meet some very friendly farmers.

Back in the Punjab. Cane fields Sugars and Rice

For this wedding, I was not the official photographer, but the couple wanted me to participate in the ceremony and preparations. I do not want to be traditional wedding photographer in India. This frankly. The guests are very numerous (300-400), all around married (in elbowing, photographers or not

. In addition, the culture is not at all the same, and is more prone to reporting rather than artistic pictures ... Do not ask married poses disillusioned . But I could take a few sympatiques still shots.

I was quite surprised shocked session "couple" to take place indoors, where the couple were photographed separately. But I respect the traditions ...

In the previous series, you can see the cameramen use halogen torches to illuminate the scene. they used that damn torch throughout the evening. This machine evil shone so strong, directly (and horribly) that I had to resign myself to abandon the artistic shots of the evening. Between scorched photos with this lamp, and made yellow, I struggled a lot ... Example photo throw from an artistic point of view:

The bride leaves sadly his family to live with his Jules, but not without a little money

In the middle of the night, some guests were in the street to rest between dances (furious). I took the opportunity to organize a mini-studio (like my western weddings) but improvised! For this, two assistants, hyper motivated by their role, held a white reflector grip and a third was "bouncer" on the right, the flash triggered remotely by Cybersync Alien Bees . Fast, simple and effective. For background, no roll 2m75 this time lol, but just outside bokeh wreaths, created by the distance of the subject with the background, the focal length (85mm 1.2L) and finally the grand opening.

Travel by train between Delhi and Punjab

The penultimate photo of this series was a big dilemma for me. I was reluctant to take the matter was so upsetting. I crossed to a sense of guilt and excitement of the story .. In the end I decided to capture that memorable moment, a beggar destroyed by his wounds digging the surface of his skull. According to my local guide, these men inflict these scalps to attract pity on their situation (for better beg apparently). Children then arrange for care throughout the day to slow infections ... Do not ask me to crops!

Delhi between urbanization and left behind.

A final tribute to all those children who have almost beaten to carry my bags pictures (it's crazy), especially Adje and his family had the great kindness to host us in this town full of nice people ... A journey which will remain unforgettable ...

A big thank you to the small Adje for his help!

The author of Blog Obturations.com

Photographer and entrepreneur, I am passionate about the Web 3.0 and sharing photo and video techniques.

Great story that actually makes you want to travel and make us travel without leaving his home to be. =) Happy birthday to you!

I love it! Beautiful photos, very professional ... I especially kiffé photos of "street photographer", we really feel like it.

it took some time but it's worth it! You're a killer Merwen in the street and I know whereof I speak. I clearly agree with you the top 35 is for these scenes especially in your hands! You dared some pictures for me or J will wisely turn off the device and why bravo. Well if treatment is to be very precise and balanced usual. J stop here for today lol

I love the softness of the series on the fields of sugar cane and rice, and of course the series of street photography which also I think I have spotted the Indian lookalike Arnold Schwarzenegger (the gentleman on his red tuktuk

)
I smiled too much looking at the pictures of the "studio" improvised. Lol. You can not stop you from making qualified with the means at hand when you do not like what is done next; p
Always a pleasure to come wandering in your reports ... Thanks!

Thank you for this wonderful story!
Bcp really talented ...

Thank you for these moments captured! Very nice series!

Congratulations for all your work and especially your sharing!

Beautiful pictures, makes me want to travel all that

Superb. I loved the series of portraits and street photography sessions. I'll try to put it all applications today (leaving for Hong Kong for 10 days also) with my modest 18-55, 50mm 1.4 and my small package format. I hope to bring enough pretty pictures to make a post to Merwen

@ Nathaniel: Thank you, good to you too fetes
@ Julien: Thank you

@ Sebastien: Lol. Vive Adenone!
@ Joperson: Thank you Jo
@ Benj: Not exactly, I should have more daring. I missed too much when I think Bazaars. But at the same time I also avoided some problems. I did not put some pictures of the subway as formally banned, but the bottom is the psychosis of terrorism.
@ David: Thank you, David.
@ Brian: Thanks Brian, my street photos certainly do not have the please you as it is kind of your specialty!
@ Lawrence: Lawrence thank you. It is always a pleasure.
@ Damien: I imagine, you made ​​almost around the country you! http://flickr.com/damienroue

@ William: Thank you.
@ Sebastian (priz vue.fr 2): Nothing.
@ Peter: I already want to leave.
@ David: Well, we will monitor your post on http://theblediansblog.net/

Always a treat to read stories and look at your photos.
Highly 2011 good holidays!

Thank you to you too!

Beautiful photos!
Can I ask you the hardware you used your technique and especially post-processing?
On this, I continue to explore your blog ....

Bravo really everything is perfect!

you worked in AV or M all the time?

@ Greg: Thank you.
5D mark II, focal listed here: /about/
contrast, brightness and exposure in post production that is all. What always natural. no excess.
@ Albert: why M mode? Av course.

just beautifull!!!!! Thank you for this wonderful trip!

Absolutely magical story .. Congratulations to all those pictures of incredible quality and density

@ Celine Celine thank you.
@ MarieLaure: Thanks

@ NSOphoto: What compliment!
Hery @: Thank you, I hope our Photo Workshop you served me today.

Otherwise just a little shocked that the children wore your bag ...

my bags.
Too shocked, but I had no choice. They insisted like crazy lol For them it was like watching Vincent Laforet for me (if you know what I mean

Refuse was an affront to them.

this series is absolutely beautiful. I'm amazed!
What talent ... I would dare to approach people in this way!

Your treatment is also excellent, this is what I want.
But impossible for me to have as much balance and color, I do not know how. And yet it is not for lack of trying.

Thank you! Yet there is no "treatment". Just good optics, good housing, and RAW settings Tünnes post prod in aperture

Hello,
I do not know anything about photo, but yours are beautiful!
I must show this to my husband, I feel it will be taped.
It really makes you want to get there as well.
Bravo, really

Pretty pictures! I love the series in the Punjab in the fields of sugar cane